Electric transportation infrastructure is on the rise in South Korea. Cities across the country are working to make public infrastructure more sustainable and environmentally conscious. One example is the city of Seoul, which plans to replace 3,000 busses that currently run on natural gas with electric busses by 2025.

Because they are in such high demand, busses need to be charged quickly. That requires a lot of power. Transporting high amounts of electric current safely and reliably can be expensive and the systems inside electric bus chargers can take a while to build. Like many companies, Moderntec is always looking for ways to improve performance and efficiency while keeping costs under control. Electric bus chargers must hold up to heavy use and perform well at all times.

Moderntec’s E-Bus chargers look very similar to gas pumps. They are small, streamlined and easy to use. However, behind the scenes, each pump connects to power units that do the necessary work of AC/DC conversion. While they are out of sight, those power banks keep the entire system running.

Within the power banks is a system of conductors that transport electric currents for conversion. Previously, Moderntec had used a cable and lug system for these conductors. In these systems, customers buy cables in rolls, cut them to the size they need and attach them to equipment using metal loops called lugs. These systems can be difficult to install because of the amount of cutting and connecting workers need to do.

As a part of ongoing sustainability efforts in South Korea, one of Moderntec’s customers approached them to build a large number of new E-Bus chargers. DAS Korea, an nVent distributor, heard about the project and thought that nVent products could support Moderntec’s needs. DAS Korea worked with Moderntec to implement nVent ERIFLEX IBSB conductors within electric charging station power units. Behind the scenes, nVent representatives shared the company’s experience with IBSB conductors and with the electric vehicle (EV) market to answer all of Moderntec’s questions.

nVent ERIFLEX IBSB Advanced is a wire replacement solution used for safe and efficient transportation of electric currents. It is easier to install and provides more design options than cable and lug systems because it is more flexible than traditional cable and customers can order it sized to the exact specifications they need. This meant Moderntec could reduce its inventory of cable by detailing precisely which lengths of IBSB it needed and only buying those parts, instead of buying a large amount of cable and cutting it down to size themselves.

The IBSB Advanced conductors also improved the safety and reliability of Moderntec power units. The nVent ERIFLEX Advanced Technology conductor insulation is very efficient, making electrical connections more dependable. Advanced Technology is constructed with materials using the latest safety technology that is low smoke, halogen-free and flame retardant (LSHFFR). These features improve safety for electrical equipment and people during installation and use, which helps Moderntec comply with rigorous international safety standards so they can more easily scale up and serve additional customers.

“Using nVent ERIFLEX IBSBS helps us reduce the total installation cost and time: IBSB can be directly connected to the main MCCB, the installation is very easy and doesn’t require any special tool,” said Mr. Kim, Director of Manufacturing at Moderntec. 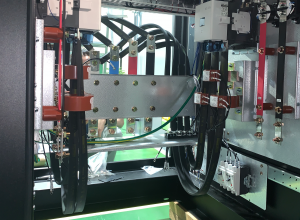 Cities across the globe are looking for more sustainable options for public transportation. With every innovation in electric vehicle technology, companies like Moderntec will be increasingly called upon to provide the infrastructure necessary to keep systems running. The reliability of IBSB helps Moderntec rest assured its chargers can help electric busses get the power they need.

Learn more about nVent's solutions for the Electrification of Everything